With more than three-quarters of Brits having travelled alone or considering doing it in future, solo travel is no longer a niche pursuit. But alert as we are to the many joys of solo travel, it’s undeniable that the world looks different through one set of eyes, and choosing your destination can mean the difference between an incredible independent getaway and a less satisfying solo sojourn.

It’s hard to imagine a coastline more abundantly blessed than Costa Rica’s, and nature’s generosity is warmly extended to travellers. The hubs of Tamarindo, Santa Teresa, Puerto Viejo, La Fortuna and Nosara are particularly solo-traveller friendly places to start, and at friendly hostels such as Tamarindo Backpackers (tamarindobackpackershostel.com), lone travellers land here and immediately place themselves within a tribe of other yogis or surfers, or simply find their crew while clambering through bat-bedecked caves or scaling volcanic peaks.

One of the world’s most biodiverse nations, Costa Rica prioritises wildlife preservation with a string of outdoor adventures on the menu and development balanced by green energy such as hydro and wind power. This makes it a mecca for a particular breed of eco-minded adventurer, a true feel-good destination.

Whether you fancy hiking, mountain-biking, kayaking or even jungle ziplining your way around the country, navigating Costa Rica is made easy for you, a real bonus when you’re doing the schlep solo. Expect to rub up against reassuringly familiar trends from home including farm-to-table dining, an emphasis on sustainable travel, and achingly hip cafés – but Costa Rica remains both tantalisingly exotic and tirelessly surprising.

Spread across 14 islands connected by bridges, with a cobblestoned old town (Gamla Stan) and a smattering of elegant parks, Stockholm combines fairytale good-looks with the functionality of a Scandinavian metropolis, and the safety and slickness of this city makes it a particularly great city option for solo females. Perhaps get your bearings in a GPS-guided Vespa Tour (vespastockholm.com) designed by locals, winding up in hip Södermalm at the Pet Sounds Bar (psb.bar), the ginsoaked sister of the legendary record store across the street, which plays everything from Abba to Zappa.

Culture comes easy in Stockholm, so start at the Moderna Museet (modernamuseet.se) on the central island of Skeppsholmen, or take things shamelessly pop at the ABBA Museum Hall of Fame (abbathemuseum.com). Berns Hotel (berns.se; from £220) is the chandelier-draped grand dame with a legendary bar and restaurant, at the geographical and figurative heart of Stockholm, but the stylish young upstart is Miss Clara (missclarahotel.com; from £150). This sleek 92-room Nobis hotel is housed in the former Ateneum girls school, with original art nouveau decor and herringbone parquet flooring, swirly bentwood bedheads and arched windows that overlook Sveavägen Boulevard.

Stockholm won’t snatch the crown for cutting-edge-cuisine off Copenhagen’s head anytime soon (the Danish capital has 15 Michelin stars against Stockholm’s nine), but at Mathias Dahlgren’s airy, informal Matbaren brasserie (mdghs.se) on the waterfront you can pick up a Michelin starred lunch for £24.

You haven’t been to Stockholm until you’ve been on the water. Get a break from the city by taking the boat out to the idyllic harbour town of Vaxholm for lunch at the Waxholms Hotel (waxholmshotell.se). 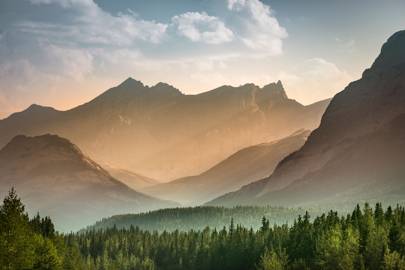 Canada’s cities are famously civilised, cultured and classy, but it’s the outdoorsy assets within easy reach of Toronto, Montreal, Vancouver or Ontario that make Canada such a mecca for solo travellers. As the globe’s second-biggest country, Canada offers a vast menu of landscapes, from soaring mountains, remote beaches and wild tundra to lush rainforest, all spread across six timezones.

Adventure highlights include kayaking or rafting the South Nahanni River in the Northwest Territories or navigating the swells and surf of Nova Scotia, but the outdoors is also stamped firmly on Canadian cities, so for outdoors-obsessed solo travellers, even the cities deliver. Vancouver’s Stanley Park is that rare thing, a city park that really does feel a little rugged, but spits you out a short cycle from one of the world’s greatest food markets and streetfood scenes at Granville Island (granvilleisland.com).

Heading north out of Vancouver, the quirky town of Dawson in the Yukon Territory offer a rich taste of Canadian smalltown culture, with a music festival (dcmf.com) that should belong on the list of any culture-craving solo traveller. Dawson is also the launchpad for snow-based activities in the winter months, and hiking and biking in the summertime.

Considering our favorites and remembering which places we disliked or wanted to avoid in the future, it usually came down to how safe we felt, how social it was, and how welcoming the locals were. With that in mind, I’ve put together a list of some of the best places to consider if you’re traveling […]